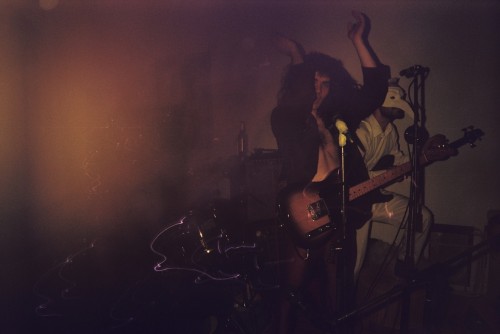 Born in Berlin in the early 2000s, Naphta were a collection of musicians working to a smudged manifesto in the beginnings of what has now become the Neukölln you’ll find, just south of Kreuzberg.

The band set out with the aim to play as few notes as possible on instruments they couldn’t play. The result was guitar solos played on flutes, broken synthesisers providing a crystalline sheen and an all-embracing attitude towards to those moments of chemical bedlam and everything that follows.

Their music represents an excursion into another world, with ever-changing soundscapes flashing past the portholes. Moments of high-tempo Kraut crescendos are balanced with melodic wind instruments caressing the ship’s sagging sails. A spectacular swirl of drive and drift.

Naphta evaporated in 2011 after several members moved out of town and a water pipe burst in the practice room. They left behind only a few recordings, damp wall paper and the hazy memories of their chaotic performances, fading pictures littered with faulty equipment, cross-dressing and a burnt-down stage.